The original Broadway production of The Crucible opened at the Martin Beck Theatre on January 22, 1953. It was directed by Jed Harris, with whom Miller had creative differences, including over the hiring of Arthur Kennedy as John Proctor. Harris did not like Kennedy’s roughness, in spite of the fact that Proctor was a farmer, and attempted to inject a more classical style into the play. Miller was unhappy with the production when it opened for try-outs in Wilmington, Delaware. He was still unhappy when the play opened at the Martin Beck Theatre on January 22, 1953. Audience reactions were mixed, as were the critical reviews (see the Critical Reception), in part because of the social and political climate of the day. Some of the weak support during the play’s early days was possibly due to a fear of being implicated by the play’s political message.

In February 1953, Miller wrote an article in the New York Times entitled “Journey to the Crucible” which discussed the trip he had taken to Salem to research the history of the trials.

Miller later had the opportunity to re-work the play, changing out some actors and adding in an additional scene between Abigail and John.  See the Critical Reception for reviews in June and July 1953 that discuss the changes Miller made. In spite of its rocky start, the play won the 1953 Tony Award for best new play.

The following is a selected list of productions of The Crucible: 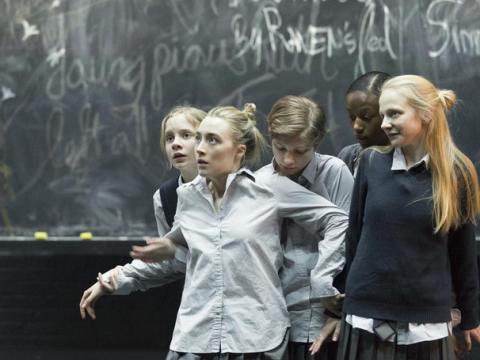 The Crucible: An Opera in 4 Acts, Based on the Play by Arthur Miller, 1961: by Robert Ward. This operatic version won the Pulitzer Prize for Music in 1962. The UT Opera Theatre presented Ward’s opera in November 2009.

Back to The Crucible home page.